BETHLEHEM, PA (October 14, 2017) - Muhlenberg College EMS is a student run volunteer EMS team providing 24x7 rapid response medical services for the 2,200 students of Muhlenberg College in Allentown, PA.  This thirty-five member organization is alerted by the Campus Safety Department when a medical emergency is reported on campus. With aging radio equipment and limited radio communications coverage throughout the campus, including inside its many buildings, Crew Chief and Technology Officer Nathan Brown worked with TuWay Communications to design and implement a total system upgrade for the team.

First, a Motorola radio repeater was installed which eliminated the two-way radio coverage problems.  Second, at the Campus Safety Office, separate paging and desk set terminals which had reached end of life were replaced with a single new Gaitronics deskset with built in paging capabilities. This was a major improvement… enabling alerting and team communications through a single terminal. Lastly, the team’s outdated portable radios were replaced with new Motorola XPR3300e portables.  Since the new radios have paging capability, this eliminated both the need for carrying a separate pager and the costs associated with maintaining a fleet of pagers. The bottom line is that the new solution provides Muhlenberg College’s student run EMS Team with a communications platform that is more streamlined, more cost effective, and more complete.

According to Brown, “The radios and new system have been performing like champs. We have had an incredible amount of call volume as of late, including evenings with more than five back-to-back or even simultaneous calls utilizing multiple channels. There were no issues and the batteries are 100x better than the old ones, too. We are so happy we worked with TuWay to get this done.” 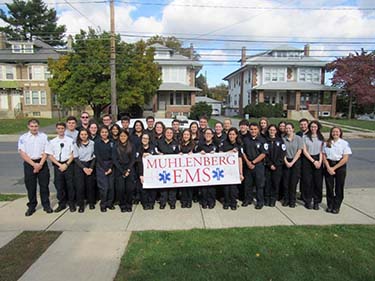